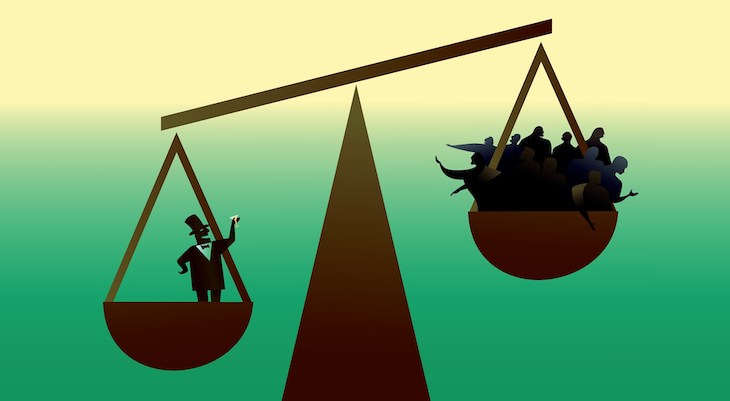 The Main Cause of Economic Injustice

One thing that BMRC works on is review of the GPUS platform to see if there are any parts of the platform pertaining to banking and monetary reform that should be amended. Two years ago, we worked on amending Chapter IV of the platform to remove monetary reform from Section I: Banking and Insurance Reform, and place it in a new Section N: Monetary Reform (Greening the Dollar). We felt that was necessary because it is really a separate issue from banking. We also revised the section pertaining to monetary reform to make it easier to understand. Our amendments were all accepted by the National Committee and added to the platform after their approval at the Annual National Meeting in 2020.

This year we took a good look at the Introduction to Chapter IV and discovered that it had a grave omission.

The title of Chapter IV of the platform includes "Economic Justice." Unfortunately, there is nothing in the current introduction that identifies the main cause of economic injustice and our position on the means of correcting that injustice.

The main cause of economic injustice is the extraordinary grant of power and privilege by Congress to private banks to create money when making loans. Private banks create 97% of the money in circulation. They also choose the recipients of these loans. Great wealth has accumulated to the private banks and financial institution because of their collection of interest on what is basically the entire money supply in the US.

This wealth has been used by the banks and financial institutions to collectively acquire controlling interest in most of the largest corporations and use their wealth to influence the election of politicians of their choice in order to gain control of the government and influence policies adopted by the government.

Government policy in creating unnecessary weapons of mass destruction, interference in foreign elections and carrying on a state of perpetual war - while ignoring climate change and destruction of the planet - can all be traced to the wealth, power and influence of the banks and financial institutions. This also results in extreme wealth inequality — not only in the US — but also globally.

BMRC considers the omission of any information about the primary cause of economic justice in the Introduction to be a serious omission that needs correction. We will be working this year to amend the introduction to Chapter IV to include some basic information on the primary cause of economic justice, and what we would like to see done about the problem. Our main solution is contained in Section N of Chapter IV. Any new proposed amendments to the platform that are approved will change our platform in 2022.

“When a commercial bank makes a loan contract with a borrower, the bank CREATES the deposit in the borrower’s account.” This is the “money power.” Have you repeated this fact 15,000 times yet? Banks CREATE what we use as money!

Those who control this ‘money power,’ have slowly changed the education of our children. This article will be the first of three on “The Money Matrix and Education” to trace the change chronologically from 1892 to today.

THE NATURE OF THE HUMAN AND EDUCATION

Back then, education was understood to mean “the drawing out of a person’s innate talents and abilities by imparting the knowledge of languages, scientific reasoning, history, literature, rhetoric, etc.”(1) The true nature of humans was (and is) the uniqueness of the individual, represented by their unique life experiences. Humans seek to grow through creativity, satisfaction of genuine needs, feelings of curiosity, etc.

Contrast the above definition of humanness with the “new, dehumanizing definition used by the experimental psychologists” and slowly implemented into American education by the Rockefeller and Carnegie foundations.

Learning is the result of modifiability in the paths of neural conduction … The situation-response formula is adequate to cover learning of any sort … the individual will learn to respond to any given stimulus, with the “correct" response … (2)

A human is a stimulus-response mechanism – that’s all.

1892 – REMOVING UNDERSTANDING OF THE MONEY SYSTEM

The Working Men’s party of New York, formed in 1829, published: “That more than one hundred broken banks within a few years admonish the community to destroy banks altogether.” (3) Lincoln’s Congress issued Greenbacks in the Civil War and led to more debate of the money question: who was to issue the nation’s money – the Congress or the private banks? Numerous third parties supported government issued money, such as the Greenback Party and Populist Party.

In 1892, the National Education Association (NEA) held conferences to decide what subjects should be taught in the increasing number of public secondary schools. The conference on ‘History, Civil Government, and Political Economy’ resolved unanimously the following, which was accepted by the NEA:

Resolved, That formal instruction in political economy be omitted from the school program (4)

The proposal was presented by Professor Woodrow Wilson of Princeton University. Wilson went on to become U.S. President and signed the Federal Reserve Bill, showing how ignorant (or manipulatable) he himself was about the monetary system.

As Edward Krug wrote in 1964: “This explains why public high schools in the United States raised generations of students who know and think nothing about money and monetary systems.” (5)

When McKinley took office … the middle class looked on impotently while factories, railroads, gas and electric plants, street railway lines, telephone systems and mines were converted from a state of individual or mere corporate ownership into the trust form, owned by great single corporations … (6)

The amalgamations were helped, and in some cases instigated, by Wall Street investment banks … (7)

The investment banks worked together in syndicates (networks) offering stocks and bonds on the exchanges. They bought the securities from the corporations at a low price, paying with bank-money CREATED easily and cheaply from the banks they controlled. Then they sold these financial securities at a higher price, pocketing the profits between the syndicate members.

The massing of so much control and wealth by these financial oligarchs was challenged by the plans for a federal income tax – finally, passed by Congress in 1913. The oligarchs’ solution was the creation of tax-exempt ‘charitable’ foundations, with no end to their corporate existence. Using these funds, the oligarchs could ensure permanent control of the society, such as permanent "charitable" control over educational policies.

Throughout the 20th century, there have been Congressional investigations highly critical of these tax-exempt foundations, but no solution of how to control them has ever been accepted. In 2010, a master’s thesis by Ryan Kapchinsky ended with these words: “This preservation of their wealth and power has enabled these families to become a ruling plutocracy within society.” (9)

In the first years of the 20th century, three private foundations were given charters by Congress, granting a self-perpetuating board of trustees and exemption from federal taxation:

1903 Rockefeller’s General Education Board – “the promotion of education within the United States of America”
1904 Carnegie Institute of Washington – “to encourage, in the broadest and most liberal manner, investigation, research, and discovery, and the application of knowledge to the improvement of mankind”
1906 Carnegie Foundation for the Advancement of Teaching – “do and perform all things necessary to encourage, uphold, and dignify the profession of the teacher and the cause of higher education”

Rockefeller Foundation was not successful in seeking a federal charter, due to increasing hostility from Congress, but got a New York State charter in 1913. 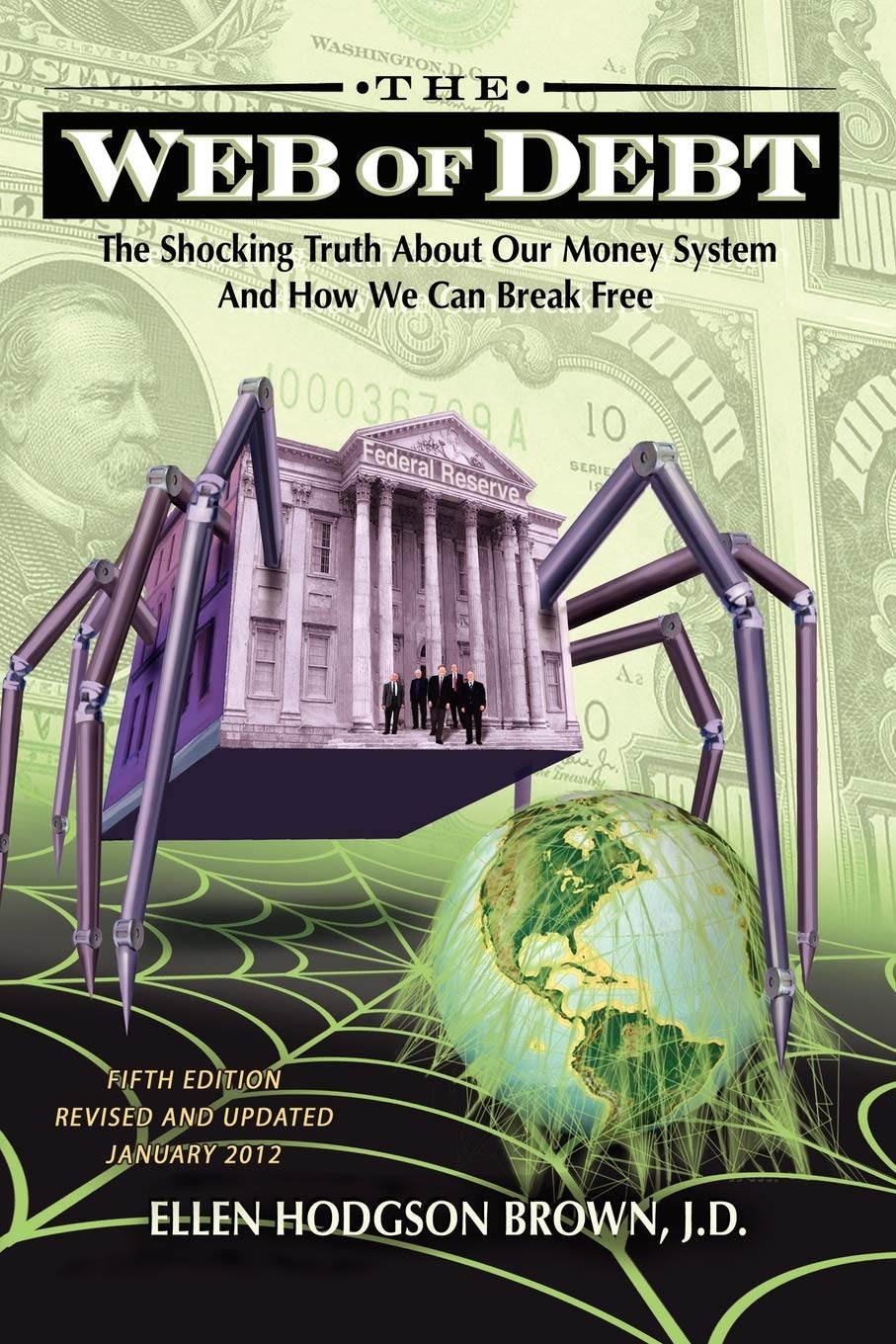 When she wrote her first book in 2007, Ellen Brown was clear and eloquent on the need for publicly controlled money supply. She gave us a strong primer on the money system and its fatal flaw – controlled by private banks.

Our reading group of six agreed that we might not have made it through the tough parts, but for our weekly discussions about it.

Brown does her best to add a little play and sparkle with the Wizard of Oz parallels, and she dramatically frames some of the epic battles in the millenary struggle to control the medium of exchange. Murder, war and intrigue helped carry us through the insanity of derivatives and hedge funds. She lays out, nice and clearly how banks in the Renaissance naturally started creating ‘money’ as ‘bills of credit’ supposedly based on gold in the vault, when in reality there was hardly ever enough gold to back the public’s need for money.

Here are my two biggest takeaways that made me grateful for the book: What made the US great and beloved in the 19th century was government-financed infrastructure that gave entrepreneurs the economic space to build new technologies and products competitively. It was called the American system, as opposed to the extractive British colonial system. Around the world countries aspiring to move from feudalism to democracy have copied our prototype, even China today. So sad that we have abandoned it and our government now does all it can to thwart such efforts everywhere.

My second discovery is the shocking contrast between the amount of dollars actually in circulation (all together 29 trillion) and the 700 (seven hundred) trillion "notional" dollars that circulate with no oversight in ‘hedge funds’ and ‘derivatives’ extracting resources and imposing trauma. "Notional" dollars is a thing!

Others in our reading group were most impressed with Brown’s strong, clear argument that bank-credit money is the source of extreme inequality and concentration of power into the hands of a tiny few people.

Writing in 2007 before the NEED Act was introduced, Brown assumed that a ”violent transition“ would be necessary to achieve government issued, public asset money, so she promoted, then and now, the FDIC takeover of insolvent banks to place some of the money creation under public control. That work has been the spark for the dynamic Public Banking movement that has grown up over these 13 years.

Thanks to Brown’s efforts, the urgent need to inform ourselves about our money system and centralized power is now widely accepted. History shows and Chief Justice L Brandeis observed, "We must make our choice. We may have democracy, or we may have wealth concentrated in the hands of a few, but we can't have both." 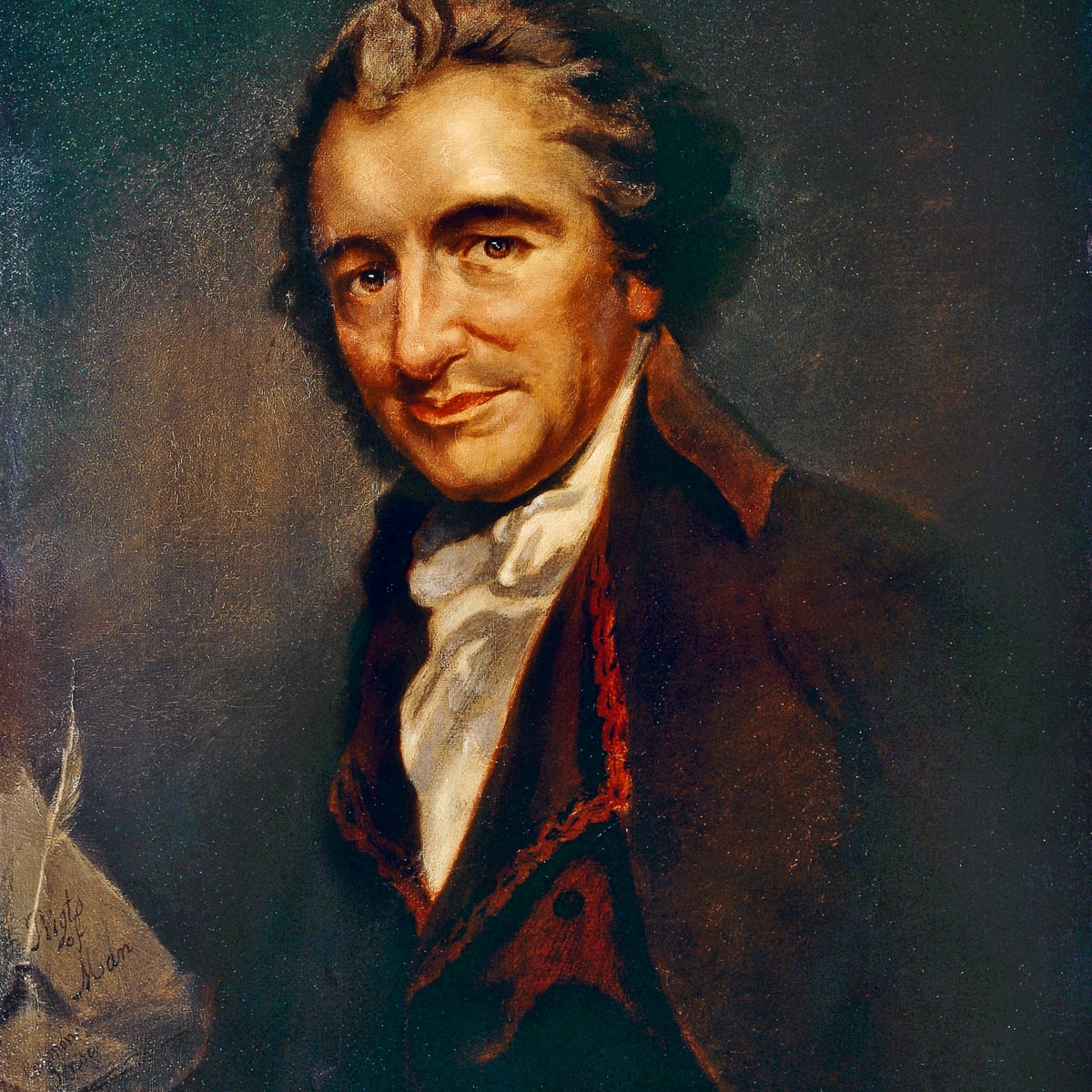 THE MOST IMPORTANT HISTORY IS THE HISTORY YOU DON’T KNOW:
Thomas Paine

Thomas Paine 1737 - 1809, was an English-born American political activist, philosopher, political theorist, and revolutionary. He was a pamphleteer, controversialist and international revolutionary. His Common Sense (1776) was a central text behind the call for American independence from Britain; his Rights of Man (1791–2) was the most widely read pamphlet in the movement for reform in Britain in the 1790s and for the opening decades of the nineteenth century; he was active in the French Revolution and was a member of the French National Convention between 1792 and 1795; he is seen by many as a key figure in the emergence of claims for the state’s responsibilities for welfare and educational provision, and his Age of Reason provided a popular deist text that remained influential throughout the 19th century. In his own lifetime, and subsequently, he has been extensively vilified and often dismissed. Yet many of his ideas still command wide interest and enthusiasm in readers throughout the world.

Paine had been a critic of paper money having embraced the theory of commodity money but his American experience had showed him that paper money could be of great service and was no doubt influenced by his friend Ben Franklin who wrote a pamphlet titled The Nature and Necessity of Paper Currency. The revolution was funded by money issued in paper, the Continental Currency, which funded most of the war despite Britain's massive counterfeiting operation to destroy its value. While the Continentals enabled our independence from England many patriots had been hurt by it because its value had been demolished. Paine reminded everyone that it was the "cornerstone" of the revolution.

Despite the great service he provided for the establishment of our nation there is no monument to him and the location of his bones is unknown. Here is a monologue of Thomas Paine, a play written by Jeffery J. Smith. Enjoy.